The world needs 2 billion electric vehicles to get to net zero. But is there enough lithium to make all the batteries?

What’s soft, silvery-white and could make it harder for the world to go green?

It might sound like the start of a joke, but it’s most certainly not one. The answer to the question is lithium, and the bad news for the world is that it potentially has nowhere near enough of it to power all the electric vehicle (EV) batteries it wants – and needs.

Lithium is a non-ferrous metal known as “white gold”, and is one of the key components in EV batteries, alongside nickel and cobalt. But rising demand for Electric Vehicles is straining global lithium supplies.

Global EV purchases jumped to 6.6 million in 2021 from 3 million a year earlier, meaning that EVs made up 9% of the market, according to the International Energy Agency (IEA). They accounted for all the growth in worldwide car sales, which rose to 66.7 million last year, up from 63.8 million in 2020. This implies that non-EV sales fell by 700,000. 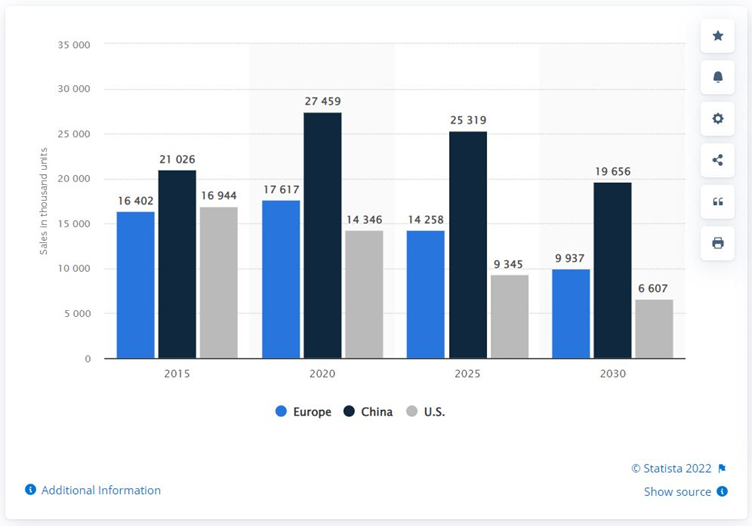 Sales of petrol and diesel cars are expected to slide quickly in this decade. Image: Statista

Sales of petrol and diesel cars are projected to slide even more quickly in the coming decade, as more countries pledge to phase them out. At last year’s COP26 climate talks, 30 governments said they would stop sales of new petrol and diesel models by 2040.

How much lithium does an EV need?

A lithium-ion battery pack for a single electric car contains about 8 kilograms (kg) of lithium, according to figures from US Department of Energy science and engineering research centre Argonne National Laboratory.

Dividing lithium production by the amount needed per battery shows that enough lithium was mined last year to make just under 11.4 million EV batteries. This is a level that annual electric vehicle purchases could hit soon, after first-quarter sales rose by 75% on the year to touch 2 million, according to IEA figures. 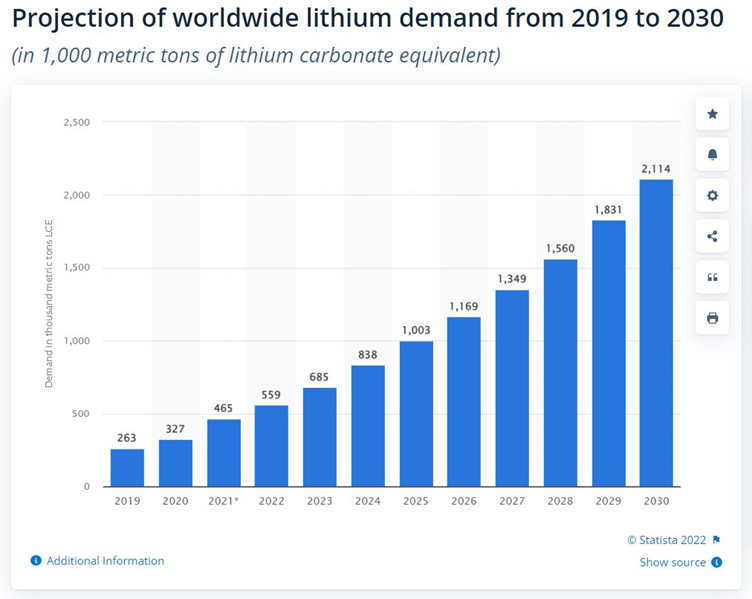 Using the same kind of calculation shows that global reserves are sufficient to produce just under 2.5 billion batteries. The IEA’s Net Zero by 2050 roadmap says the world will need 2 billion battery electric, plug‐in hybrid and fuel-cell electric light‐duty vehicles on the road by that date to hit net zero.

However, not all the world’s lithium can go into EV batteries. The metal is also used in batteries for a host of other items, such as laptops and mobile phones, as well as to make planes, trains and bikes.

The world’s lithium reserves are theoretically sufficient to meet the expected rise in demand. However, this assumes all of the reserves can be brought into production, and that all of them are good enough for use in batteries, which is unlikely.

“Only a handful of companies can produce high-quality, high-purity lithium chemical products,” the IEA says. “While several planned expansion projects are in the pipeline, there is a question mark over how rapidly their capacity can come online.”

Lithium mines that started operations between 2010 and 2019 took an average of 16.5 years to develop, according to the IEA report The Role of Critical Minerals in Clean Energy Transitions. McKinsey estimates that over 80% of mining projects are completed late.

The IEA says the world could face lithium shortages by 2025. And Credit Suisse says lithium demand could treble between 2020 and 2025, meaning “supply would be stretched”.

Campaign group Transport and Environment says there is only enough lithium to produce up to 14 million EVs in 2023, Reuters reports. Given the trajectory of EV sales, as shown in the chart below, that could leave many would-be buyers empty handed. 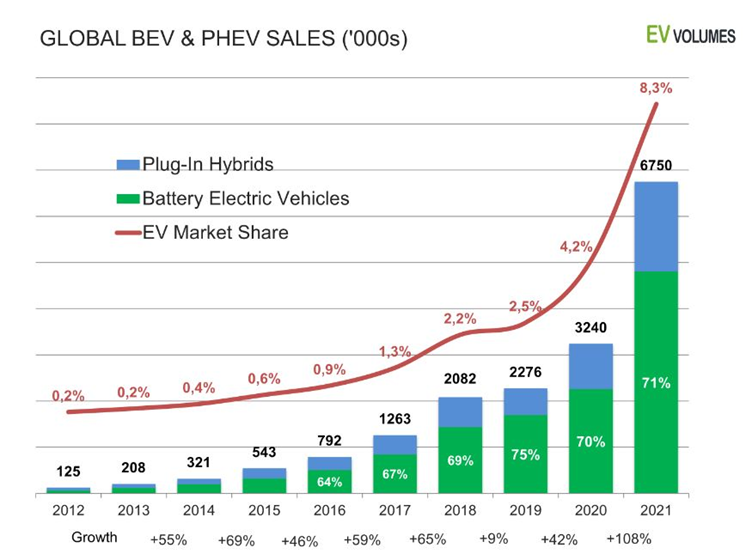 “There simply isn’t going to be enough lithium on the face of the planet, regardless of who expands and who delivers, it just won’t be there,” Lake Resources Chairman Stuart Crow told the Financial Times. “Car makers are starting to sense that maybe the battery makers aren’t going to be able to deliver.”

Volkswagen, the world’s second-largest car manufacturer, has already sold out of EVs in the US and Europe for 2022. Ford’s E-Transit van sold out before production had even begun.

Another potential obstacle to getting lithium out the ground and into electric vehicles around the world is the concentration of these resources in a few places.

Australia had the highest production in 2021, according to the US Geological Survey, but Chile has the world’s biggest lithium reserves. The South American country is part of the so-called “Lithium Triangle”, along with Argentina and Bolivia. Just under 60% of Earth’s lithium resources are found in these three countries, according to the 2021 US Geological Survey’s Mineral Commodity Summary.

However, lithium extraction requires very high volumes of water, and this is leading to problems around water stress – a situation where a region’s water resources are not enough to meet its needs.

This is particularly concerning given that a lot of lithium is found in drought-prone regions – such as South America and Australia. Bolivia’s San Cristóbal mine reportedly uses 50,000 litres of water a day, and lithium mining companies in Chile have been accused of depleting vital water supplies.

More than half of today’s lithium production is in areas with high water stress, the IEA says. “Several major producing regions such as Australia, China, and Africa are also subject to extreme heat or flooding, which pose greater challenges in ensuring reliable and sustainable supplies,” it adds.

Serbia this year withdrew licences for a lithium mine because of widespread protests. The demonstrators said the site would contaminate water supplies and damage the landscape irreversibly.

EVs remain a relatively new market, meaning developments with batteries or manufacturing methods may still lie ahead that could alleviate potential lithium shortages.

“Emerging technologies, such as direct lithium extraction or enhanced metal recovery from waste streams or low-grade ores, offer the potential for a step change in future supply volumes,” the IEA says in The Role of Critical Minerals in Clean Energy Transitions.

It also says that the amount of used EV batteries reaching the end of their initial lifespan is expected to surge after 2030. Recycling these could cut lithium supply requirements by about a tenth by 2040, it says.

The World Economic Forum makes a similar forecast in its report, A Vision for a Sustainable Battery Value Chain in 2030. “In the base case, an estimated 54% of end-of-life batteries are expected to be recycled in 2030,” it says, adding that this could cover 7% of demand for raw materials used in battery production in that year.

An emerging second-hand electric car market may also alleviate some of the supply problems. China is actively trying to develop a second-hand market, Bloomberg reports, saying that such sales almost doubled between 2017 and 2020, rising to 47,000.

The UK’s second-hand EV sales more than doubled in January-March compared with a year earlier, taking them to 14,586. Like in China, it’s not a huge number, but if new EV sales are able to keep speeding up, second-hand ones will inevitably do so too.