James Webb Telescope: A scientist explains its first images and how it will change astronomy

After decades of development and many trials and frustrations along the way, the James Webb Telescope has finally started to deliver what it came for. On July 12, Nasa released the first science observations made by the suite of instruments carried on board the mission, marking what we eagerly anticipate will be the beginning of a new era in astronomy.

After the nail-biting launch on Christmas Day, a series of critical deployments followed to open up the telescope and its sun-shade. If any of these operations had failed, James Webb telescope would have been an unusable disaster. But the programme was perfectly executed, a process that ran more smoothly and successfully than anyone of us had dared hope, let alone expect.

This is not just a testament to the skill of the engineers, technicians and scientists in the project. It also highlights the tremendous importance of the testing programme carried out on Earth to verify the procedures and which occasionally revealed problems that needed to be fixed before launch. While this sometimes resulted in schedule slippages and cost increases, it has ultimately produced a perfect telescope.

During July, the telescope moved from its checkout and testing phase to operation, as the amazing observatory it has long been planned to be. Those of us who have been involved in the journey and will work on the data, can hardly wait.

The new “early release observations”, selected by an international committee of representatives from Nasa, Esa (European Space Agency), CSA (Canadian Space Agency), and the Space Telescope Science Institute, are part of a programme designed to highlight the wide range of science the telescope will carry out.

It is very exciting to see the new images – I was not prepared for the level of crispness and fine detail that can be seen. It’s a joy to finally have such high-quality data.

Unveiled by US president Joe Biden, the stunning image of SMACS 0723, a cluster of thousands of galaxies, was released on July 11. The massive foreground galaxy groups magnify and distort the light of objects behind them, helping us to peer back in time at very faint objects.

The image shows the galaxy cluster as it appeared 4.6 billion years ago. But more distant galaxies in the image (the ones which appear stretched) are about 13 billion years old – and we already have more data on them than we have on any other ancient galaxy.

Images such as this will help us understand how the first stars and galaxies formed. Some of these may be among the most distant objects known, from the beginning of the universe. The picture is a composite “colour” image made from observations made at different wavelengths. It was taken by the telescope’s Near-Infrared Camera (NIRCam). 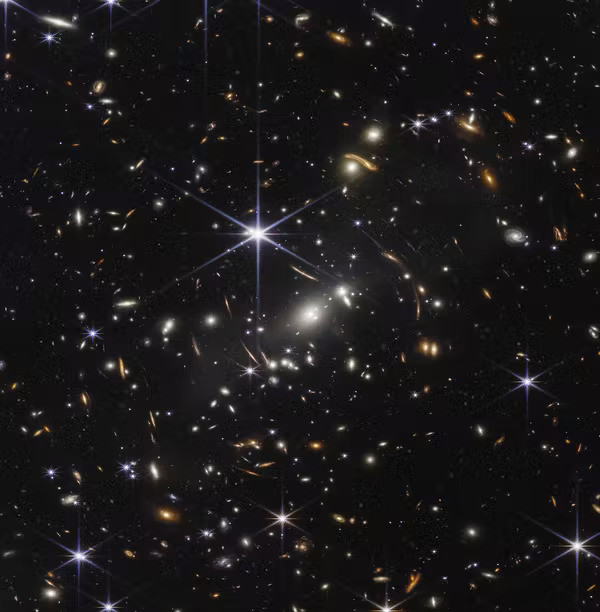 Images like this from James Webb Telescope, will help us understand how the first stars and galaxies formed. Image: NASA, ESA, CSA, and STScI

James Webb has also caught a glimpse of Stephan’s Quintet, a group of five galaxies that are merging some 290 million light-years away in the constellation Pegasus. The image also suggests there’s a supermassive black hole at the centre, and shows stars being born. The data will tell us more about how galaxies evolve and the rate at which supermassive black holes grow. 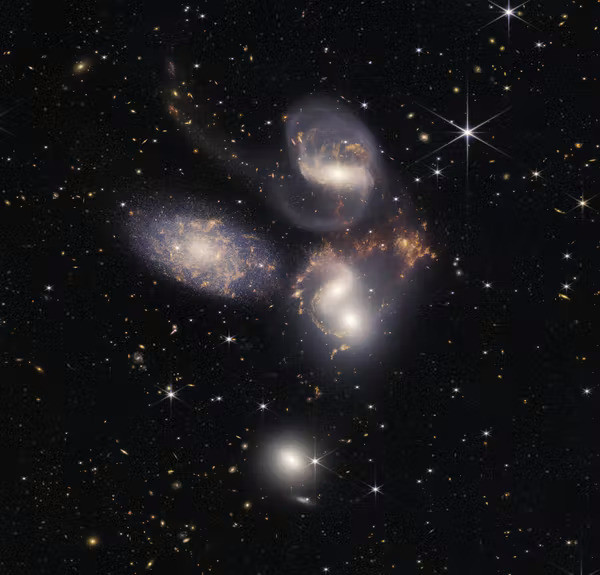 Stephan’s Quintet, a group of five galaxies that are merging some 290 million light-years away in the constellation Pegasus. Image by James Webb telescope Image: NASA, ESA, CSA, and STScI

The next picture shows the Carina Nebula, seen in the image below, which is one of the largest and brightest nebulas (clouds of dust and gas in which stars are born). James Webb can probe deep inside dust in the infrared light, to reveal the inside of the stellar nursery – which we’ve never seen before – to discover more about how stars are born.

The Carina Nebula is located approximately 7,600 light-years away in the southern constellation Carina. The image shows hundreds of completely new stars (every dot of light is a star), and jets and bubbles created by them. We can also see details that we cannot yet explain. 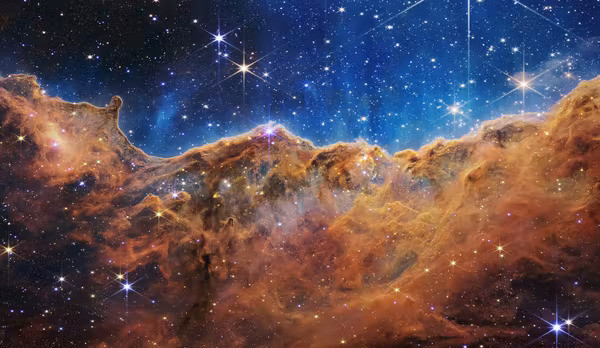 The Carina Nebula, one of the largest and brightest nebulas, as captured by James Webb telescope. Image: NASA, ESA, CSA, and STScI

The next, spectacular image is of the Southern Ring or “Eight-Burst” nebula, a planetary nebula, which is an expanding cloud of gas, surrounding a dying star, or in this case two dying stars orbiting each other. It is nearly half a light-year in diameter and is located approximately 2,000 light years away from Earth.

The foamy orange shell in the image is molecular hydrogen (a gas which forms when two hydrogen atoms bond together), whereas the blue centre is an electrically charged gas. In the right-hand image, you can see the two dying stars in the centre, giving us an opportunity to study stellar death in unprecedented detail.

The new data is the result of months of painstaking measurement and testing to make the James Webb telescope ready for use as a scientific tool following deployment. The first steps were to focus and align the images of each of the mirror segments. Each of the telescope’s scientific instruments – NIRCam, The Near InfraRed Spectrograph (NIRSpec) and Mid-Infrared Instrument (MIRI) – were also switched on and tested.

All these instruments, which look at deep space in different wavelengths, had to be cooled down, along with the telescope, otherwise they would radiate background heat which would interfere with the sensitive observations of astronomical objects. The last to be turned on was MIRI, which operates at the lowest temperature, just seven degrees above absolute zero, which took several months to achieve.

The size of a telescope – its aperture – is the key thing that decides the ultimate quality of the images and the detail that can be observed. Bigger is better. Large telescopes with apertures up to ten metres in diameter have been constructed on the ground.

However, the interfering effects of the atmosphere, which disturb the light reaching the James Webb telescope, make it hard to achieve the ultimate resolution. Also, on Earth, background light from the night sky limits the telescope sensitivity, the faintest objects we can see.

With its six-metre aperture, James Webb is the largest telescope ever launched into space and from its vantage point a million miles from Earth, free from the Earth’s atmosphere, it is expected to deliver the best, most detailed views of the universe we have ever seen. There is no doubt that it will revolutionise our understanding of the cosmos, just as its predecessor, the Hubble Space Telescope, once did.